Thank you to Tracy at Compulsive Readers for my place on the tour and to the publisher Trapeze at Orion Publishing Group for my ebook via Netgalley. All opinions are honest and my own. 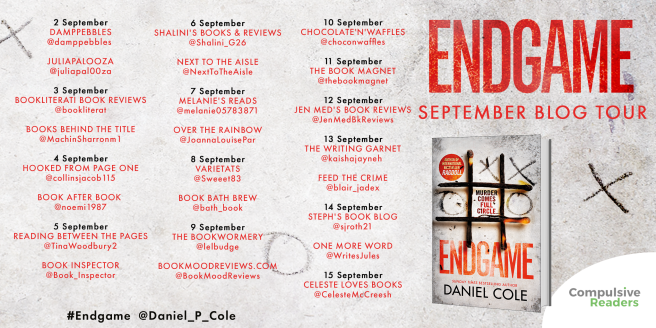 A locked room. A dead body. A secret that went to the grave.

When retired police officer Finlay Shaw is found dead in a locked room, everyone thinks it’s suicide. But disgraced detective William ‘Wolf’ Fawkes isn’t so sure.

Together with his former partner Detective Emily Baxter and private detective Edmunds, Wolf’s team begin to dig into Shaw’s early days on the beat. Was Shaw as innocent as he seemed? Or is there more to his past than he’d ever let on?

But not everyone wants Wolf back – and as his investigation draws him ever deeper into police corruption, it will not only be his career on the line – but the lives of those he holds closest as well…

This is a fitting conclusion to the Ragdoll trilogy, if you haven’t read the other two Ragdoll and Hangman then you really need to read them first to gain the back story and character development. It may also be confusing if you try to read as a stand-alone as there are many references to previous events especially at the start where it basically continues on from book two.

This book kicks off with the suspected suicide of Finlay Shaw and Wolfs subsequent arrest on visiting his widow. This isn’t as full on action as his previous books it’s more puzzle and police procedure. But there is still the trademark dark humour which my warped heart loves.

Wolfs arrest sees him bargaining information for a spot on the investigation and that in turn takes them back to a case that Fin and his then partner worked on in 1979. The dual timeline really worked and will help the armchair detective readers work out relevant clues. It was great to have the team back together again and Wolf and Baxter’s dynamic partnership although fractious was for me the strength of this book.

Although all ties have now been neatly sewn up and drawn to a wonderful conclusion there are hints on a book four. I for one will be waiting with bated breath.

Born in 1983, Daniel Cole has worked as a paramedic, an RSPCA officer and most recently for the RNLI, driven by an intrinsic need to save people or perhaps just a guilty conscience about the number of characters he kills off in his writing. He currently lives in sunny Bournemouth and can usually be found down the beach when he ought to be writing. Daniel’s debut novel Ragdoll was a Sunday Times bestseller and has been published in over thirty countries.